Under the Hood: Tips and Tricks to Driving the new BMW M4 GT3

The BMW M4 GT3 is Assetto Corsa Competizione’s latest and greatest addition. So, let’s get to know it a little bit better. 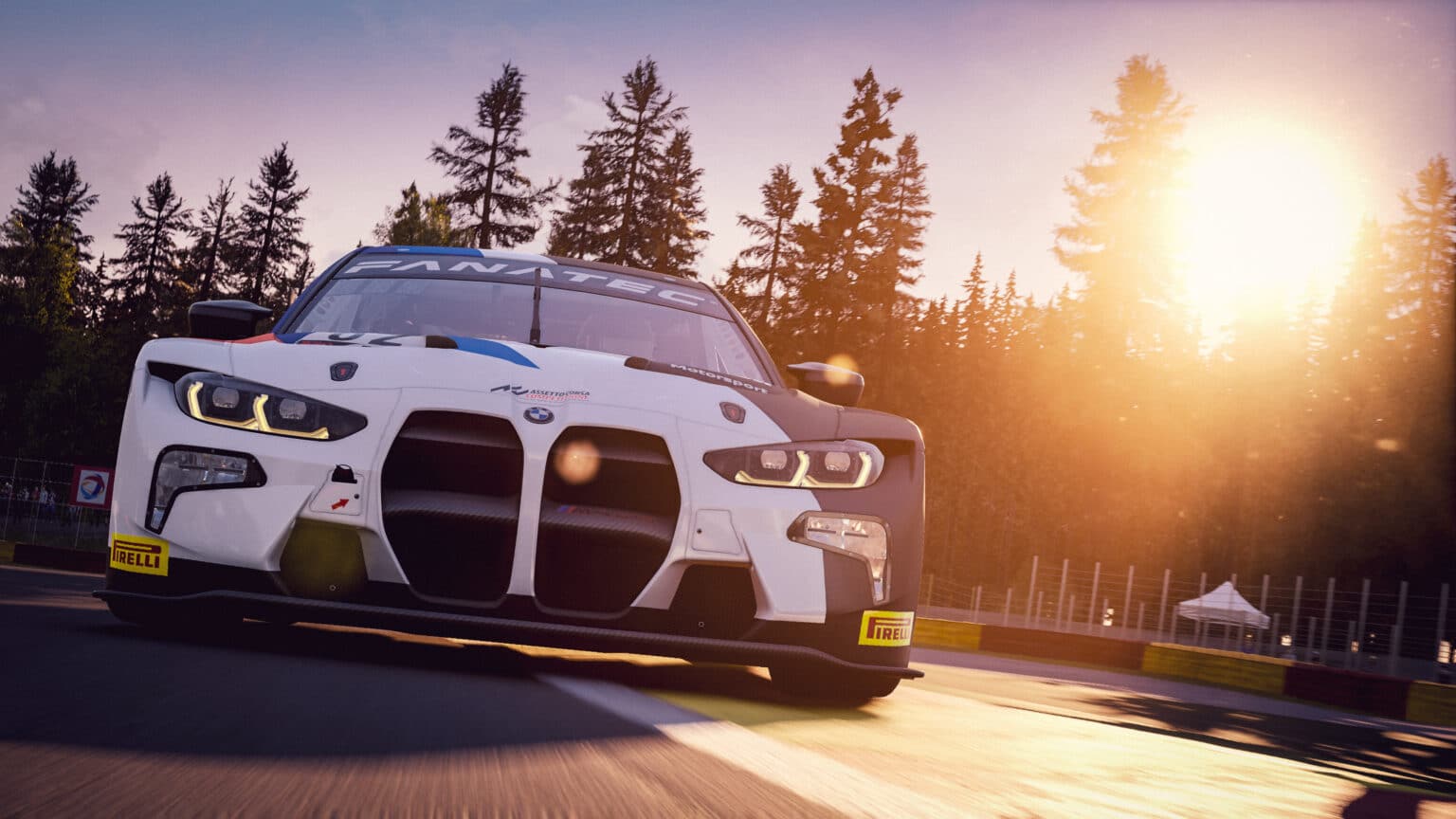 Fresh out of the box in Version 1.8 of ACC, the BMW M4 GT3 made its debut in sim racing ahead of its competition curtain-raiser in 2022. Blasting out of Bavaria and tearing up the tracks in Assetto Corsa Competizione, it’s a fan-favourite and one of the most popular starter cars in the sim.

Introduction to the BMW M4 GT3

The BMW M4 GT3 uses an all-new 3-litre straight-6 engine codenamed P58, derived from the S58 road car engine of the M3/M4. This takes it away from the M4 GT3’s V8-powered predecessor, the M6 GT3, which was an absolute Goliath of a car that we have delved into in the past here at Coach Dave Academy. This powers it to a potential maximum power output of 590hp, though Balance of Performance will naturally reduce this to even out the playing field. An example of BoP changes was

Despite being 6mm narrower than the M6 that went before it, the M4 actually clocks in at nearly 80mm longer at 5.02m and has a longer wheelbase at 2.917m. This makes it bigger than the Bentley Continental GT3 dimensionally.. What that means on track is a huge floor area to play with, like the M6, which allows the M4 GT3 to be an exceptional car in medium to high-speed corners where downforce generation is the biggest mitigating factor.

A great starting point when it comes to understanding what makes the M4 tick is figuring out what works best for it in the setup menus. We have an array of setups available here at Coach Dave Academy for the GT World Challenge and Intercontinental GT Challenge here, as well as setups for British GT circuits and the recently-released American circuits that all feature our brand-new CDA3 philosophy. You can read more about that in our announcement for our all-new ACC setup subscription service.

Being one of the latest generations of GT3 cars in a field where most existing cars are a few years into their development cycle, the M4 GT3 is an incredibly well-rounded car that is designed with the gentleman driver in mind. As a platform, it is exceptionally stable and the electronics package is first class. Thanks to the large dimensions of the M4, the car is extremely well poised and stable in the medium to high speed where downforce generation and pitch control is key to extracting confidence from the driver. As you would expect from a front-engined car, kerb behaviour is not only consistent but supple too. Few cars are able to make the most of the kerbs as well as the M4 GT3.

The M4’s aerodynamic package is very strong, which means at higher speed circuits like Silverstone, Kyalami, and Suzuka, the car excels thanks to lots of downforce-heavy. The unique thing about the M4 is its aero map. After a certain rake angle difference, the car’s aero balance will start to shift rearwards instead of forwards, as the rear wing changes the angle of attack.

Unlike on other cars, where simply increasing rake angle pushes the aero balance forwards creating a more nervous/agile car, in the M4 higher rake can be used to alter car balance to provide a safer platform for the driver if a higher wing is preferred. This is part of what makes it a safer car to start with as, much like we mentioned earlier, the M4 GT3 is designed with the gentleman driver in mind.

With increases in wing angle, the M4 GT3 does not lose too much straight-line speed per click of wing change, as it is an inherent weakness of the car already. This means that high wing angles do not penalise the car in the same way as others, and in that regard, the behaviour is very similar to that of the Porsche 911.2 GT3R.

Can’t wait to get started? You can pick up setup bundles for the M4 GT3 at the main GT World Challenge tracks, the British GT tracks, the newly-released America DLC tracks, and Wet setups, all in handy bundles.

Once you have the aero platform to your liking, a big feature of the M4 is its use of bumpstops to build rotation into the car. Because you can use both high and low rake with the car, you can utilise the bumpstop ranges and rates very effectively to build or take away rotation based on how it is currently behaving based on your current aero platform in terms of rake angle. If your aero variation is quite far rearwards but you want to build response into the front end of the car under pitching (braking) you can utilise the front bump stops quite effectively.

The car also enjoys running stiff in terms of anti-roll bars, transitional changes of direction at high speed are something the car can really exploit due to its aero platform and overall body roll should be kept to a minimum.

Overall the car has a slight safe understeer bias at higher speed whilst at low speed when it is mechanically under stress, there is slight oversteer bias thanks to the aggressive nature of the torque of the engine at lower rpm when the boost comes in. Rear toe at low speed is a powerful tool in combating any wheelspin or stability issues as well as the differential.

With the BMW M4 GT3, practice makes perfect in order to get the very best out of the car. Our ACC setup subscription service gives you access to all of the setups and MoTeC data for every car in Assetto Corsa Competizione, as well as a 10% discount on our world-class coaching service, for as little as £7.99 per month.

The power delivery of the P58 engine in the M4 GT3 is very aggressive. Not only does the boost/torque come on exceptionally strong low down in the rpm range, the initial acceleration of the car once not traction limited is very good meaning out of most slow-speed corners not many cars will be able to live with it.

That really strong acceleration up to 5th gear obviously slows down quite a lot when peak drag starts to affect the car. Another thing that works against the car at very high speed is the very long gear ratios. Very rarely will 6th gear be used, only on certain tracks like Paul Ricard and Bathurst down the Mistral and Conrod straights respectively.

The braking performance of the car is however incredible. Unlike most front-engined machines, you can also run the brake bias quite extreme towards the rear, which only reinforces the car’s strength under braking. This is in part down to the car’s stability and its ability to remain flat under big pitching motions. For similarity purposes, those who are used to Aston’s strengths will feel right at home here.

Here at Coach Dave Academy, we’re always open to supporting you on your sim racing journey. On top of our comprehensive setup subscriptions for Assetto Corsa Competizione and iRacing, we offer a variety of Coaching sessions to help you get those extra tenths and seconds out of the car. Starting at $40 for our data-driven coaching and going up to $100 for our standout one-on-one coaching, this is an offer that you’d be hard-pressed to find anywhere else.

On our other platforms, such as YouTube, you can also watch our live setup sessions (such as one we did recently for the M4 GT3 at Indianapolis) and our onboard laps for our setups (such as our M4 GT3 onboard at Watkins Glen).