The Best Sim Racing Wheels for Xbox One X in 2021

The Xbox racing community is awash with drivers of different skill levels, budgets, taste in racing games and overall needs. Therefore, there is unlikely to be a single best Xbox racing wheel that suits everyone. In this guide, we will outline the best racing wheels for Xbox sim racers from throughout the ranges of Sim Racing equipment brands.

This wheel works through a mixed gear and belt system and is capable of either 270° or 900° degrees of rotation. Most importantly, however, it features force feedback, a must-have for any sort of serious sim racing and a gem at this budget. The force feedback is communicative but is suited more for beginners. The steering is fairly low resistance and none of the in-game effects is translated particularly violently through the wheel, however, the wheel is still capable of giving a solid level of feeling.

As a Thrustmaster wheel, it is therefore compatible with some of the various other high products from them. One of which is the TH8A shifter, which allows the user to choose from either a gated h-pattern or a sequential shifter and is very enjoyable to use. Furthermore, the TMX has been around since 2016 and has since been released in a PRO version, featuring the T3PA pedals bundled along with it.

The Thrustmaster TMX is excellent value for money and is perfect for beginners looking to learn the sensations of force feedback and up their Sim Racing experience while not breaking the bank in the process.

The Logitech G920 is generally an excellent first force feedback wheel for Xbox users and is enjoyable to use on anything from arcade racers to simulators. It is much in the same price range as the TMX, coming in at around $200.

This wheel features dual-motor force feedback and is capable of 900° of rotation. It does reasonably well to communicate track surfaces and car handling characteristics.

The wheel design itself has a hand-stitched leather rim and brushed stainless steel paddle shifters with a 12 o’clock indicator adding to the overall quality. While the pedal box may not be to everyone’s taste, with many sim racers complaining about the noticeably stiff brake pedal, they still exhibit the same material quality that the base itself has. It should be noted that there are plenty of tutorials on Youtube on how to fix this issue, however, it does take away from the overall experience. When looking at the total package, it is less polished than the opposing Thrustmaster base but is still a more than decent choice at this price range.

Just like Thrustmaster, the G920 has the optional Logitech H-pattern shifter at its disposal, however, the Thrustmaster TH8A shifter is arguably of superior quality.

Ultimately, the Logitech G920 is still a great choice for this price point and one of the best wheels on Xbox One in its own right.

The Logitech G923 is the upgraded version of the G920 and sees Logitech onto the next generation of consoles. As this is a relatively new wheel, the best place to buy one would be directly from the Logitech website for $399.99.

The G923 features an improved force feedback system dubbed “Truforce” which not only translates track surfaces and car handling characteristics better than its predecessors but goes to provide more precise feedback. Keep in mind, however, the Truforce function is not supported by all racing games, however, it is slowly being introduced into newly released titles and currently works with platforms such as iRacing and ACC.

The pedal set has also been changed, featuring a more progressive brake pedal (a previously weak point of the G920). The G923 also features a programmable dual-clutch system, which after being set up, can be activated by pressing either RSB or LSB and the foot clutch simultaneously, a feature that is usually only found on much more expensive wheels.

Aesthetically, the G923 is almost exactly the same as the G920’s Playstation counterpart, the G29. The building quality is excellent, featuring a leather steering wheel and brushed stainless steel components now finished in black.

The G923 is a very good wheel but it is still very similar to the much cheaper G920. Whether or not you choose the G923 over the G920 is entirely down to the personal tastes and purposes of the user.

The Thrustmaster TX is Thrustmaster’s mid-range option and can be purchased for around the $400 mark, just like the G923.

This wheel features dual belt force feedback and is capable of 900° of rotation. With the right settings, this wheel feels absolutely fantastic on most semi-serious driving games as well as hardcore sims like Assetto Corsa Competizione. The force feedback is excellent and superbly communicative with track surfaces and the overall handling of any given car translated clearly and realistically.

The standard wheel design itself is also great, featuring high-quality leather and brushed metal components. The button layout is also very easy to work with mid-race, making the design not only of high quality but also extremely functional. The wheel also features a quick-release system, meaning that it can be swapped out for other products in the Thrustmaster range, such as the Ferrari Formula 1 and GTE wheel designs. The included T3PA pedal box also exhibits the same air of quality. The 3 pedals themselves are made from 100% metal, are fully adjustable and come with a conical brake mod to adjust their resistance.

Like its entry-level relative, the TMX PRO, the TX is also compatible with the TH8A shifter and various other Thrustmaster ecosystem products. Ultimately, the Thrustmaster TX is fantastic for this price point and despite its age, it is still a competitive option on Xbox One, more than 5 years after its release.

The Fanatec CSL Elite is the entry-level of the Fanatec range. With the WRC wheel rim included, it can be purchased relatively cheaply from the Fanatec website for $549.

The CSL Elite features a brushless servo motor and is capable of 900° or 1080° of rotation. The force feedback is excellent for a belt-driven wheel and when it is properly calibrated (which is made easy by the fact that many modern racing games come with specific Fanatec profiles) it is very smooth and precise.

The CSL Elite also has a few other novel features including a drift mode and shift lights. Perhaps one of the major appeals of the CSL Elite is its compatibility with the Fanatec ecosystem of products, which includes steering wheels, pedals, and more, just like Thrustmaster. The CSL Elite is also equipped with a quick-release system in order to use the range of steering wheels.

Granted, the CSL is very expensive compared with the entry-level wheels of other brands but it offers a driving experience and a level of customisation that lesser alternatives cannot match.

The V2.5 is the latest, upgraded version of the Clubsport platform and improves on what was already a great wheelbase for Xbox One. The V2.5 features updated force feedback as well as newer, cheaper and internals. It is belt driven and features a brushless servo motor capable of between 90° and 900° degrees of rotation. It also produces 8Nm of torque, making it one of the strongest belt-driven wheels. As a result, Clubsport V2.5 offers a very strong and smooth force feedback feel.

Ultimately, the Fanatec Clubsport V2.5 is a very polished wheelbase that offers a fantastic driving experience. It is quite expensive, however, especially for a belt-driven wheel that often doesn’t come with a steering wheel or pedals.

In researching for this piece, there seems to be a general consensus among sim racers that the single best wheel available for use on the Xbox One, is the Thrustmaster TS-XW.

Released in 2017, the TS-XW shares essentially the same architecture as Thrustmaster’s flagship wheel, the TS-PC Racer, which you can also learn how to set up on the Coach Dave Academy blog. It features a brushless 40-watt servomotor, providing exceptionally communicative force feedback. It also features an in-built cooling system, meaning it is unlikely to overheat, no matter the conditions of use.

While the base itself can be sold separately, it is compatible with all Thrustmaster wheel rims and shifters in the ecosystem, but the most common option is the 1:1 scale Sparco P310 competition mod. Despite the fact that this rim is designed to be a replica, Thrustmaster has been able to expertly factor in the necessary Xbox controls. The d-pad, for example, is conspicuously designed to blend in with the style of this rim, whilst it also features adjustable paddle shifters. The size of this particular wheel also means that it is optimised for almost any type of vehicle, be it open-wheel racers, GT cars, stock cars or whatever you want to take to the track.

In the past, some sim racers have complained that the T3PA pedals compatible with cheaper models such as the TX and TMX didn’t quite do the TS-XW justice. But, the T-LCM Load Cell pedals released in 2020 are sure to vanquish such complaints. You can learn how to set up the Thrustmaster T-LCM pedals here.

The Thrustmaster TS-XW is understandably one of the most common picks from some of the most serious Xbox racers and can be purchased for $699.99 at Amazon.

The Fanatec Podium DD series is one of, if not the only direct drive option for Xbox One and the more expensive DD2 model is currently the flagship of the Fanatec range.

Being a direct drive wheel, the DD2 offers levels of almost unrivalled levels of feedback for Xbox One and is able to translate s intricate surface details and handling characteristics such as the shift of inertia in the car. Furthermore, the motor also offers substantially more torque, up to 25Nm and will consistently produce 20Nm of torque in a race situation, compared with the usual 2-8Nm of gear or belt-driven wheel by virtue of being direct drive.

The Fanatec Podium DD2 has a host of useful features including a multi-purpose OLED screen that displays wheel tuning information, force feedback data, the wheel’s temperature, motor data and more.

It is also backwards and forwards compatible with any previous or future Fanatec products, including wheel rims, hand brakes, shifters, pedals, etc however these are not included in the price.

The Fanatec Podium DD2 is an excellent option for those serious about sim racing on consoles, but it comes at a price. The DD2 can be purchased for $1499.95, from Digital Motorsport, which makes it the most expensive option on this list, in spite of the fact that neither pedals, a wheel rim or a shifter are included in that price. However, for those willing to pay, the DD2 is offering perhaps the most advanced simulation experience on consoles. 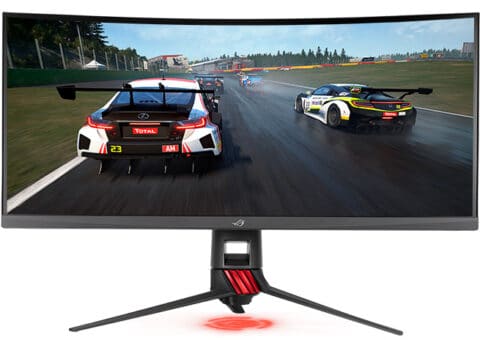 The Best Sim Racing Monitors in 2021

Your monitor setup can make or break a sim rig, as they can eiter amount to a great level of immersion, or leave with a low quality, stuttery drive. Unless you want to play in VR, these monitors will make you feel as if you are right thre in the car. 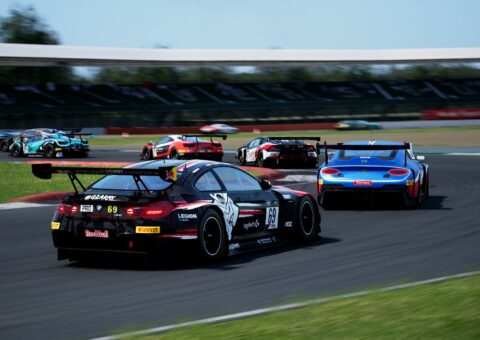 Under the Hood: Tips and Tricks to Driving the BMW M6 GT3

Assetto Corsa Competizione comes with a plethora of high-precision GT3 cars, but there are some cars that pose more of a dificulty than other. The BMW M6 GT3 can be one of the fastest GT3 cars in ACC, but you’ve got to know its secrets.

Copyright 2021 © All rights Reserved. Coach Dave Academy is part of Speed Capital Ltd. Designed by David Perel.
All trademarks referenced on this site are property of their respective owners.